Commenting upon the corpus of Hippocratic writings comprising of more than seventy books; Zimmerman and Veith write that ‘the most complete and most masterful descriptions are those of dislocations, particularly of the shoulder and hip’.[1]

Image 1 depicts the first of six different methods that Hippocrates discusses on how to set a dislocated shoulder downwards into the armpit, which is described by Paré (c. 1510-90) as follows:

‘First, let one of sufficient strength, placed on the opposite side, firmly hold the Patient upon the joint of the shoulder, lest he move up and down with his whole body, at the necessary extension, working and putting it in : then let another, taking hold of his arm above the elbow, so draw and extend it downwards, that the head thereof may be set just against its cavity, hollowed in the blade-bone : Then at last let the Surgeon lift and force up with his fist the head of the bone into its cavity. Here this is chiefly to be observed, that in fresh luxations, especially in a body soft, effeminate, moist, and not over corpulent, that it sometimes comes to pass, that by the onely means of just extension, the head of the bone freed from the muscles and other particles wherewith it was, as it were, entangled, will betake it self into its proper cavity; the muscles being by this means restored their place and figure, and drawing the bone with them, as they draw themselves towards their heads, as it were with a sudden gird or twitch; wherefore in many, whilest we thought no such thing, it sufficed for restitution only to have, extended the arm. But if the luxation be inveterate, and the hand cannot serve, then must the Patients shoulder be fastned to a post with the forementioned ligature, or else committed to ones charge, who may stand at his back and hold him fast : Then the arm shall presently be tied about, a little above the elbow with a fillet, whereto a cord shall be fastned; which being put or fastned to the pulley, shall be drawn or stretched forth as much as need shall require. Lastly, the Surgeon, with a towel, or such like ligature, fastned about his neck and hanging down, and to put under the Patients arm-pit, near to the luxation, shall, raising himself upon his feet with the whole strength of his neck, lift up the shoulder, and also at the same time bringing his arm to the Patients brest, shall set the head or the shoulder-bone, forced with both his hands into its cavity, as you may see by the precedent Figure’.[2]

Image 2 illustrates an instrument known as an Ambi, also spelt Ambé, and a standing frame, which De Moulin describes as a lever that ‘consisted of a narrow plank to which the arm was secured in extension. One end of the plank was put in the armpit under the head of the humerus. Then the arm was levered over a crossbar placed in the axilla’.[3] Thomas Johnson’s English translation of Paré’s Les oeuures de M. Ambroise Paré … includes a key describing the different lettered components in the illustration as follows:

‘AA Shows the two ears, as it were stops made to hold and keep in the top of the shoulder, lest it should slip out when  it is put into the frame or supporter.

BB The frame or supporter whereon the Ambi rests.

CC The pin or axeltree which fastens the Ambi to the supporter.

DD Screw-pins to fasten the foot of the supporter that it stir not in the operation.

EE The holes in the foot of the supporter, whereby you may fasten the screw-pins to the floor’.[4]

Image 3 is a depiction of an instrument for reducing a dislocated shoulder called a Remora, which was screwed into a wooden surface and consisted of a pin with a ball-shaped knob on top that was placed in the armpit of the patient while the arm was being stretched by a pulley. Johannes Scultetus writes that, although the instrument described by the German surgeon Guilhelmus Fabricius Hildanus (1560-1634) was highly commended by later surgeons, the dislocations of the shoulder, in his mind, ‘are far more happily reduced’ by Hippocrates’ Ambi ‘if they cannot be set with the hand, than by the Remora or any other instrument’.[5] 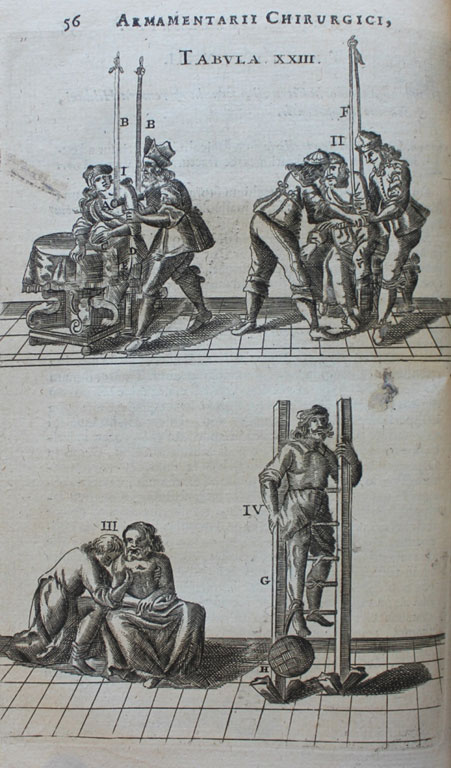 Image 4 consists of four figures, numbered Fig. I-IV, demonstrating Hippocrates’ methods of extending and setting a shoulder bone that is broken; reduction of the arm out of joint; reducing the shoulder slipped under the arm pit; and reducing of the thigh bones out of joint respectively, which are described by Scultetus as follows:

‘Fig. I. teaches how to extend and to set the shoulder bone that is broken, which Hippocrates Sect. 6. de fractur. text. 9. describes excellently. Wherefore the most exact distance of the arm is this. A piece of Timber of a cubit long A, or somewhat shorter, as are the handles of spades, must be bound on both sides with the cord B, and hanged up; but the man placed upon some high stool must so lean upon it with his hand, that the handle may be so placed under his arm-pit, that he can hardly sit down, but may remain almost hanged up. Then some one firm bolster or many C, being laid under and above it, at that height which may answer to the arm placed at a right angle; it were better to hang by a broad and soft thong of leather, or a broad band tied about it D, some heavy weight E that may gently stretch it, or else some other strong man may forcibly draw the arm downwards at the bending of the arm Fig. II. but the Physitian standing and placing one foot on a higher place, must attempt the cure, and with the palms of his hands set the bone; which truly will be easily done, for this way of extending is commendable if a man use it rightly. Others commend the way that Celsus used to extend the shoulders, which he describes very darkly, Lih. 8. cap 10. but Fasius hath clearly opened the meaning of his words intirely, in his comm. upon the former words of Hippocrates, to which I think fit also to subscribe.

Fig. II. is the reducing of the arm out of joint, according to Hippocrates his mind, where the elbow is slipt forth to the inward or outward part; the distention must be so ordered that the arm may be placed at a right angle with the shoulder. But it behooves us to lift up the arm-pit with the band F put under it; and to lay the arm upon something, and about the joint to hang some weighty matter Fig. I. or else to press it downwards with the assistants hands, as in this Figure. But whilest the joint is hanged up, it is necessary to thrust hard with the fore part of the palms of the hands. This Figure is convenient, whilest the arm is bound, hanged up and placed. When it slips forth on the hinder side, it must be suddenly extended, and with the fore-part of the palms of the hands forced into its place again, which also must be observed in reducing other bones. When it slips forth into the fore part, laying a linnen cloath upon it, wrapt up in form of a ball, it is necessary at once to bend and reduce it, Table XXIV. Fig. I. But if it slip into the other, or hinder part, when it is reduced, both of these also must be done: See Table XXIV. Fig. I.

Fig. III. shews Hippocrates his way of reducing the shoulder slipt under the arm-pit. For though that be the most excellent way of reducing, which was commended a little before, Table XXI. Fig. VI. yet this which follows comes next to it, which our old man seems to commend in these words. Wherefore they whose shoulders slips often forth, may for the most part reduce it themselves. For thrusting under the arm-pits the knuckles of the fingers of the other hand, they thrust the joint upward, and they draw the bunched part of the arm to their breast. Also after this manner the Physitian shall force it into its place; if the inward part of the joint be slipt forth, putting his finger under the arm-pit, he shall set his head to the top of the shoulder and bring it back from the sides; but setting his knees to the binding of the elbow with his arm, he shall thrust it to the sides. But it is necessary that he who reduces it should have strong hands, or else he must do it with his hands and his head; and some other that assists him, must bring the bunched part that sticks forth unto his breast.

Fig. IV. is the reducing of the thigh out of joint, which Hippocrates describes as it here follows. But the hip is thus reduced, whether it slip forward or inward. A ladder is set in the ground, whereupon the man sits with his sound leg lightly extended, and bound about it with the best convenience; but to his leg out of joint G, there is hanged a basket H full of stones, or some earthen vessel full of water: See the Figure of it in Galen, comm. 4. in Hippocr, de artic. text. lib, 4’.[6]

Hidayet, Sari et al., ‘The historical development and proof of lumbar traction used in physical therapy’, Journal of Pharmacy and Pharmacology, vol. 2, no. 2 (2014), 87-94.

Milne, John Stewart, ‘The apparatus used by the Greeks and Romans in the setting of fractures and the reduction of dislocations [Part I]’, Interstate Medical Journal, vol. 16, no. 1 (1909), 48-60.

Paré, Ambroise, The works of that famous chirurgeon Ambrose Parey, translated out of Latin, and compared with the French, by Th. Johnson … (London, 1678). This is an English translation of Paré’s Les oeuures de M. Ambroise Paré … (Paris, 1575). Worth had the 1685 Lyons edition.

Scultetus, Johannes, The chyrurgeons store-house : furnished with forty three tables cut in brass in which are all sorts of instruments, both antient and modern ; useful to the performance of all manual opperations, with an exact description of every instrument … and faithfully Englished by E.B. (London, 1674). This is an English translation of Scultetus’ Armamentarium chirurgicum  … (Ulm, 1655). Worth had the 1693 Leiden edition.